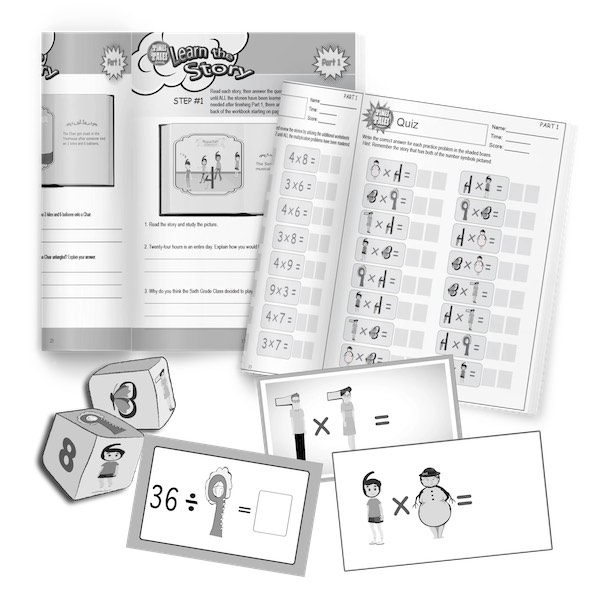 Wonder how Times Tales came about? Great question! Times Tales is actually the brainchild of Jennie Winters. While Jennie was teaching her two boys the times tables, she noticed they were having a difficult time, consistently struggling with certain problems. Answers for the lower, easily calculated facts weren't a problem, however, the upper times tables just wouldn't stick. To overcome this problem she incorporated a commonly used memory tool called mnemonics and transformed the higher facts into a memorable story. It worked! Her boys were able to memorize all the facts in record speed and with minimal effort to boot! Even with very little review, her boys could recall the stories months later! Jennie was so impressed she joined with her sister Marillee and another partner to fully develop what has now become Times Tales.

After they developed the first few stories it was time to test it. The "guinea pig" was Marillee's oldest daughter Meagan, who was 7 years old at the time. Once again, Times Tales came through and Meagan memorized all the upper times tables in less than an hour! She also could repeat them even weeks later. They knew their program was something that could really help students, especially because the times tables are so critical to learning any type of math.

After they got a couple of the flipbooks put together with the instruction manuals they decided it was time to test the waters. In 2003 they listed the first edition of Times Tales for sale on Ebay. It sold right away! They were ecstatic that the program they had put so much thought and time into was something that someone else might need. They quickly created a company that you know today as Trigger Memory Publishing. Over the years Times Tales has provided enough of a second income that Marillee and Jennie were able to stay at home and homeschool their kids. It has also allowed more quality time spent between the two sisters.

Once the product was put on the market, countless reviews of how Times Tales had not only helped average students but students with learning disabilities, especially dyslexia! Because Times Tales had a whole new approach to learning the multiplication facts, it seemed to work with students that were out of options. Even though Times Tales was not created specifically for students with learning disabilities, the sisters realized how helpful it was after receiving countless reviews from amazed parents and teachers. Times Tales is even endorsed by Susan Barton, founder of Bright Solutions for Dyslexia.